Home » BLOG » Did you know that bumblebees sleep on flowers?

Did you know that bumblebees sleep on flowers?

Not everyone knows that, apart from bees, there are many other pollinating insects. Bumblebees are just an example and they are fundamental to the Earth’s ecosystem.

They can be easily distinguished from bees for their size (bumblebees are a little bigger than bees) and for their shape; they are, in fact, round and fuzzy. They can also be distinguished from bees by the fact that their sting (of which only female specimens are equipped) is smooth and can therefore sting more than once, unlike the serrated sting of bees that makes it possible for them to sting only once, since the sting remains trapped, causing the death of the bee. It is however important to say that, just like bees, bumblebees are characterised by a docile temperament; this makes it very rare for them to sting people. Bumblebees live in colonies, even if much smaller than those of the bees: the male specimens go look for nourishment (nectar and pollen), whilst the female specimens prepare the nest and look for the nourishment for the bumblebees that will be born.

Bumblebees, unlike bees, do not survive the long winters; in a whole colony, only the queens remain. They can be more than one and must be fecundated in order to survive. The queens then seek shelter where they can hibernate throughout the winter. After the winter, when spring comes, the queens go look for nectar and pollen to feed the new bumblebees and look for a suitable place to create the perfect nest to give life to the new colony. 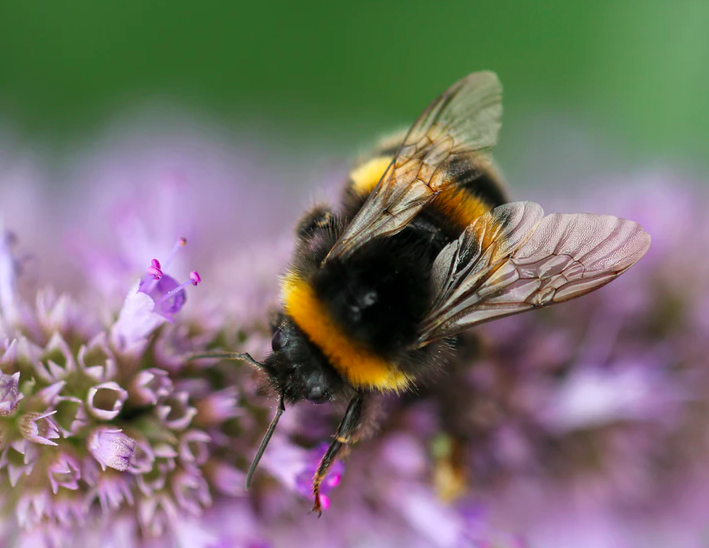 But why do bumblebees sleep on flowers?

As we said before, the queens are responsible for the creation of the nest, which is usually created in trees or in cavities of the soil. Male bumblebees have the only task of finding the nourishment and taking it to the nest to feed the new bumblebees. Once this task has been accomplished, the male specimens are no longer useful within the nest. Being therefore only an obstacle to the construction of the nest, the queens “kick them away”. Without shelter, they therefore position themselves on nearby flowers, often sleeping close to the pistil of the flower, from which they take the nectar and the pollen for nourishing.

And when it rains? Well, when it rains they look for deep flowers (such as pumpkin flowers), to use as a shelter from the rain, so that they can sleep safely.