Why are bees so important?

It is important to point out that bees are pollinating insects, which is a necessary mechanism for biodiversity. Suffice it to say that bees are responsible for about 70% of the pollination of plant species, ensuring a very high percentage of global production, namely 35%.

There are three main ways in which bees can be poisoned: by ingestion, by contact or by asphyxiation. Generally, the first two are the most common ways of causing bee deaths. Contamination can also occur at a great distance from the field that has been treated, due to the drift effect caused by sub-optimal weather conditions such as wind. Indirect contact with active ingredient residues on vegetation is also another possible route of exposure of foragers in the field. Many pesticides, such as neonicotinoids, have the property that they can be translocated by systemic living to all parts of the plant, and this implies another possible danger for foraging bees that can be contaminated by foraging pollen, nectar, honeydew or guttation water.

In order to effectively assess the effect of pesticides on bees, it is necessary to examine not only the level of mortality that these products can cause under the various conditions mentioned above, but also the sub-lethal effects, as very low doses may cause alterations in the bees’ communication system, social activities, cognitive abilities and orientation.

In general, it can be said that most chemicals used as insecticides are toxic to bees, although some are more so than others! 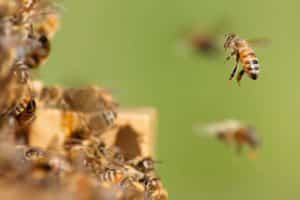 What would happen if bees disappeared?

The complex balance of our planet would be upset! All the plants that bees pollinate would be lost, so all the animals that eat these plants and humans would have less meat, fruit and vegetables!

What can be done?

The prerequisite for a reduction in pesticide poisoning in beekeeping would be an awareness on the part of all beekeepers, focusing on the importance of bees for agricultural production and environmental biodiversity. Unfortunately, the bee is seldom viewed with the respect due to its usefulness. Cooperation between farmers and beekeepers is important. Not only when it comes to choosing the product to be used, the method of application and the conditions under which it is to be used (which has hitherto been the exclusive prerogative of farmers), but also in terms of the timing, location and positioning of the hives in cultivated fields! Suffice it to say that in many cases, bees die as a result of failure to comply with the most basic rules on the use of these chemical products!

The products to be used should be chosen from those that are least toxic to bees and least harmful to the environment!